Fire in the Alps 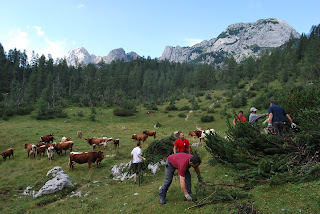 Overgrowth removal Every second Saturday in August, there are many bonfires along the Alps. Fire has always been a symbol of hope and herald of danger, especially in the past. On Saturday, 11 July 2012, traditional working action Fire in the Alps took place in Triglav National Park. Initiators of this action in Slovenia are CIPRA Slovenia, Triglav National Park and Alpine Association in Slovenia. Slovenia has been participating in this action since 2004, when the Alpine convention entered into force. With this year’s bonfires, we want to draw attention to inadequate implementation of the Alpine convention in Slovenia. Its understanding and implementation only remains within the areas most concerned by the Alpine convention. At 9am on Saturday morning, 16 volunteers gathered in Malo polje, under the Vodnik’s home, and we helped remove vegetation. Among the volunteers, there were wardens and voluntary wardens of Triglav National Park as a protected area, volunteers of CIPRA Sloven
1 komentar
Pročitajte više
Više postova